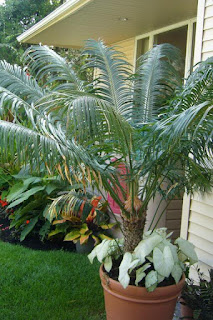 Cycas is the most widely distributed genus of the order Cycadales. There are about 20 species which occur in wild state in China, Japan, Australia, Africa, Nepal, Bangladesh, Burma and India.

1. C.pectinata : It is distributed in Nepal, Sikkim, Someshwar hills in Bihar and plains of Assam, Manipur, East Bengal.

2. C.revoluta : It is native of China and Southern Japan and widely cultivated as ornamental plant in India. It can be propagated by means of bulbils.

3. C.beddomei : It occurs in wild state in Andhra Pradesh. It has a dwarf trunk only up to 40 cm high.

4. C.circinalis :It is common in the western parts of Peninsular India, Western Ghats and Odisha hills. It is 1.5-3 m in height.

5. C.rumphaii : This species occurs in Andaman and Nicobar islands. The plant is 1.5-4 m in height.

6. C.siamensis : It is widely distributed in Burma, China and Thailand. In India it is grown as ornamental plant. It is about 3 m tall. 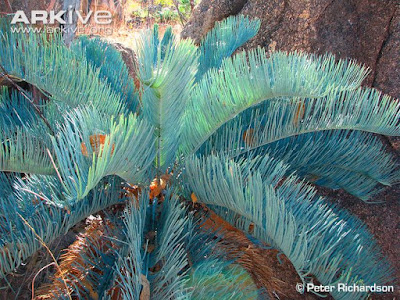 This show regular alternation of generations between sporophyte and gametophyte.


In this type of cycle, a sporophyte gives rise to a sporophyte of the same sex. Vegetative Cycle takes place with the formation of adventitious buds called bulbils in the basal part of stem. Bulbils are protected by scale leaves. During favourable period bulbils detach from the parent and grow into an independent sporophyte.
This cycle is more prevalent in Northern India where male plants of Cycas revoluta are not found.

Reproductive organs:
After many years of vegetative growth sex organs develop on Cycas  in the form of cones or strobili. Cycas is dioecious i.e. male cone and female cone (lax) born on separate. The male sporophyte is heterogametic having sex chromosomes-XY while the female sporophyte is homogametic having sex chromosomes-XX.
Male cone is conical and grow up to 1.5 m. It has a central axis or cone axis surround by compactly and spirally arranged micro-sporophylls. Each microsporophyll has adaxial (upper) and abaxial (lower) surfaces. The adaxial surface is ridge like with sterile apophysis at the apex. The adaxial surface contains numerous microsporangia in group of 3-6 called sori. Each microsporangium filled with numerous haploid microspores or pollen grains (Fig. 9.5, 9.6 & 9.7). 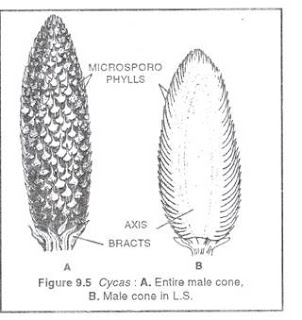 In Cycas true and compact female cone (ovulate strobilus) is absent, instead it is a lax where megasporophylls are loosely arranged at the stem apex that appears like a rosette. Each megasporophyll is a modified foliage leaf ranging from 15-30 cm. in length. It has a proximal petiole, middle ovule bearing part and upper pinnately dissected sterile region. The middle fertile part bears 2-12 sessile rounded ovules in two rows (Fig. 9.8 & 9.9). 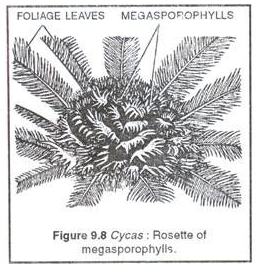 The ovules are orthotropous, unitegmic and sessile or shortly stalked. The Cycas ovule is largest in plant kingdom with 6-7 cm in diameter. In young stage ovules are green covered with brown hairs but after fertilization hairs are lost and appear orange to red in colour. The body of ovule is called nucellus, covered by a thick integument in all sides except an opening called micropyle. The apex of the nucellus has a pollen chamber and a nucellar beak. The integument consists of three distinct layers: outer and inner fleshy layers and middle stony layer.

Inside the nucellus, one cell differentiated into megaspore mother cell. It undergoes reduction division (meiosis) to form a linear tetrad of four haploid megaspores. Usually, the upper 3 megaspores towards micropyle degenerate while the lower most functional megaspore (embryo sac cell) undergoes free nuclear division followed by wall formation to form a cellular female gametophyte or endosperm.
Hence, the formation of female gametophyte is monosporic, i.e develops from a single megaspore. During formation of endosperm nucellus is utilized. It should be noted that in gymnosperms the endosperm develop before fertilization and is haploid (n) while in angiosperms it is triploid (3n) and formed after fertilization (Fig. 9.10).

At the micropylar end of female gametophyte 2-8 archegonia develop. All the necks of archegonia open into an archegonial chamber formed by a depression in female gametophyte (Fig. 9.11). Each archegonium develops from single superficial cell called archegonial initial.
It gets enlarged and divides transversally into outer primary neck cell and inner central cell. The primary neck cell divides anticlinally to form two neck cells. The inner central cell enlarges and its nucleus divides into venter canal nucleus and egg nucleus. Soon the venter canal nucleus disorganizes. Thus, a mature archegonium has two neck cells and an egg. Neck canal cells are not formed. The egg cell in Cycas is largest in the plant kingdom (Fig. 9.11).

Pollination
In Cycas pollination is anemophilous (by wind). The 3-celled microspores liberate from mega-sporangia are blown away by wind. Finally microspores reach on ovules and get enlarged in the pollination drop (ooze) of micropyle. As the ooze dries up, the microspores are drawn into the pollen chamber.

After a gap of about 4 months, post-pollination development of male gametophyte occurs. The exine ruptures and the intine grows out in form of a pollen tube. The pollen tube acts as a haustorium, i.e. absorb food while penetrating through the nucellus and hang in the archegonial chamber. In the pollen tube, generative cell divides into a stalk cell and a body cell. Finally, the body cell divides into two male gametes or antherozoids. Thus, a fully developed male gametophyte consists of a disorganized prothallial cell, stalk cell, tube nucleus and 2 male gametes (Fig 9.13 )

Each male gamete appears top-shaped with 5-6 spiral bands of cilia. The size of male gamete in Cycas varies from 180-210 µm.
Fertilization
In the archegonial chamber, the tip of pollen tube burst to discharge its contents. One of the sperms enters the archegonium. When moving towards egg, the sperm lost cilia and cytoplasmic membrane. So the fusion of a male nucleus and egg nucleus occurs to form a zygote (2n). It is noted that in Cycas fertilization exhibits both siphonogamy (i. e. formation of pollen tube) and zoidogamy (i.e. participation of ciliated male gametes).

Embryogeny
The zygote (2n) secretes cell wall and becomes the oospore. The zygote or oospore is the first cell of sporophyte generation. The oospore undergoes free nuclear division followed by wall formation to form a small cellular mass called pro-embryo. The pro-embryo differentiated into a basal embryonalzone, middle suspensor and upper haustorium. The haustorial region remains in contact with the free-nuclear region and soon disappear (Fig. 9.15).

The cells of embryonal zone divide and re-divide to form embryo proper which is differentiated into two cotyledons, plumule and radicle. The suspensor becomes enlarged and coiled to push the embryo into the nutritive endosperm. The endosperm froms a pad like tissue called coleorhiza which protects the tip of radicle.
Since, a single Cycas ovule contains 2-8 archegonia; the same number of embryo develops. All degenerate except one embryo that reaches maturity.

As a result of post-fertilization changes the entire ovule becomes a seed. Following changes takes place in the process:

Seed Germination:
The testa of Cycas seed emits pleasant odour and sweet in taste. This causes its dispersal by birds. The seed remain variable for a few months. Under favourable condition, the seed germinates into a sporophyte. The seed germination in Cycas is hypogeal i.e. the cotyledon remains underground enclosed in the endosperm and absorb food for the growing embryo. The plumule form leafy shoot and radicle elongates into a tap root (Fig. 9.16).

Three Generations Locked in Seed:
A seed contains three generations locked one within another.
1. Parent Sporophyte: Seed coat and nucellus.